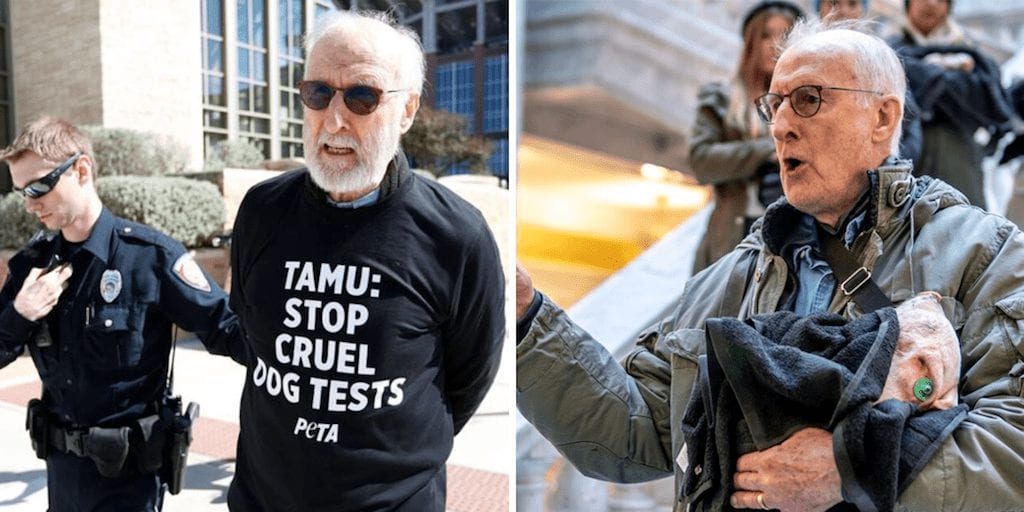 The ‘Babe’ actor was pictured taking part in a demonstration at Texas A&M University organised by PETA.

The group targeted a University Board of Regents meeting, and Cromwell joined the fight to stop the establishment from using dogs for medical research.

Cromwell, 79, said in a statement: “Texas A&M continues to torment golden retrievers and other dogs, even though decades of these experiments have not led to a cure for humans with muscular dystrophy. It’s time to let the dogs out, and my friends at PETA and I want them released to good homes where they can live out the rest of their lives in peace.”

A recent study by BTBX concluded that Texas A&M has stopped breeding dogs for muscular dystrophy, but activists are still not satisfied at the research found that dogs are still used for testing.

“Human clinical trials in DMD patients, based in part on studies in dogs, currently are underway..dogs [are] a good comparison when researching better health for people,” the University writes.

Cromwell is regularly involved in animal rights protests. Last year he stormed into the Utah State Capitol building holding a dead piglet in a protest against animal cruelty.

The actor was joined by 200 Direct Action Everywhere (DxE) activists to demand action from the governor and attorney general in response to alleged animal cruelty at Smithfield’s Circle Four Farms in Milford, Utah.

Cromwell, who turned vegan in 1995 after starring in the film Babe, held a dead piglet allegedly recovered from the farm by anonymous whistleblowers.

In a statement sent to Totally Vegan Buzz, he said: “It’s a question of heart. Do you have the heart and compassion to see this creature as something viable in this world? Like any other sentient being?

What do you think of James Cromwell’s efforts? Share your thoughts in the comments section below!