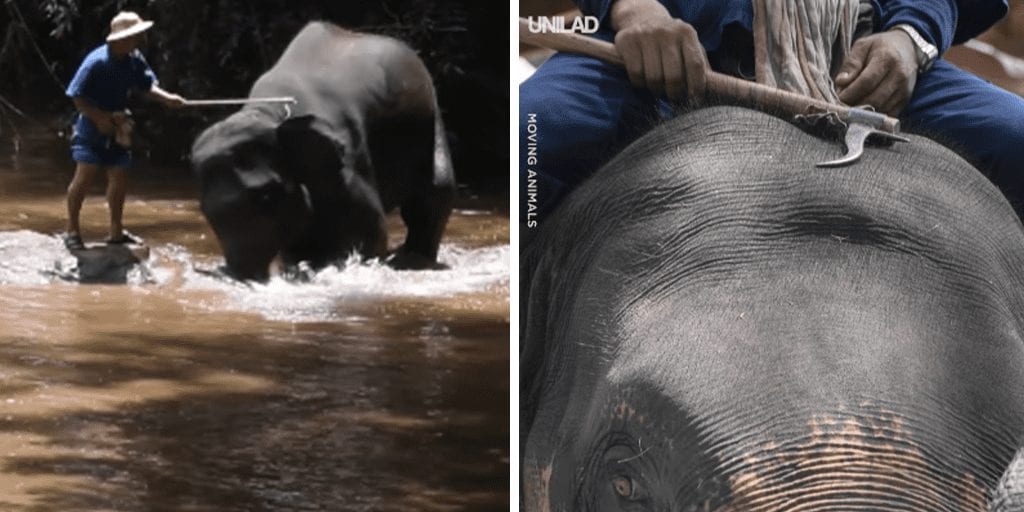 An investigation into the animal tourism industry in Thailand has revealed how baby elephants are ‘broken’ by online traders who sell them to companies posing as animal sanctuaries.

Young elephants are separated from their mothers soon after birth and forced to learn tricks by trainers who jab them with metal hooks.

Tourists must ensure they research any company claiming to be a sanctuary as reports of abuse are rapidly on the rise.

The lucrative industry starts with elusive online traders who lack the skills needed to raise the animals who belong in the wild with their mothers. Many are transferred to businesses after being starved to the point of extreme malnourishment.

An investigation featured in the Star followed a two-year-old elephant named Ploy who has already been taught to hold a ball in her trunk and throw it through a hoop in Ban Ta Klang village in eastern Thailand.

Investigators said this is where babies are ‘broken’ into submission by traders to prepare them for performances in front of crowds of tourists who take selfies and pay for rides.

The tamers say they have been training elephants for generations for safety reasons and claim that they do not use excessive force.

“We do not raise them to hurt them… if they are not stubborn, we do nothing to them, ” one mahout told the publication.

But activists argue that elephants should be free to live their lives in the wild, and many condemn brutal methods to keep the animals in line. Babies are also removed from their mothers – who are extremely maternal – a the age of two, robbing them of key attachments

The industry has evolved and grown following the end of the use of elephants in the logging trade, which has been banned.

But the skills to tame elephants has been passed down through the generations, and mahouts today are drawn to the tourism trade which can fetch huge payments from wealthy tourists.

Celebrities have even been in the firing line of activists for visiting so-called sanctuaries – including Kim Kardashian.

Tamed elephants themselves can attract huge sums – those who can perform tricks can fetch £60,000, which is a massive amount when compared with average wage in Thailand.

The mahouts in Ban Ta Klang tame elephants who are showcased for cash at nearby parks which pose as sanctuaries.

Mae Taeng park in Chiang Mai charges $50 for an entrance fee and welcomes 5,000 tourists each day – who are keen to see young elephant Suda paint pictures which are then sold to wowed onlookers before she takes many for gruelling rides.

Tourists are increasingly prepared to boycott any businesses which have poor welfare standards, but many will see the word ‘sanctuary’ or ‘refuge’ and automatically believe the organisation is ethical.

Incidents of abuse at so-called sanctuaries are regularly and increasingly exposed by animal rights activists.

Last month a so-called elephant ‘sanctuary’ in Thailand was blasted by activists for abusing animals with bullhooks to force them to perform.

Activists exposed Maesa Elephant Nursery in Thailand, where baby elephants are separated from their mothers when they are just two years old.  The group shared footage of the abuse at the site across social media.

Why You Should Never Ride An Elephant

These baby elephants are put through a ceremony known as "Phajaan", which involves crushing the animals' spirit in order to make them more subservient.

People for the Ethical Treatment of Animals recommends 8 key questions to ask before visiting a sanctuary:

Share this article to reveal the truth behind elephant tourism. What’s the best way to spot an unethical ‘sanctuary’? Share your thoughts in the comments section below!