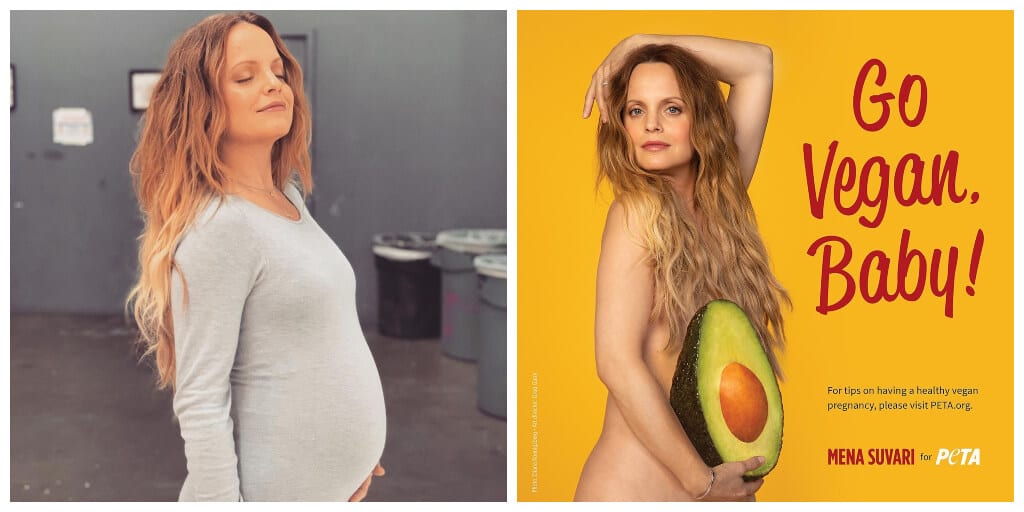 “I wanted to raise my son to be a kind, loving and empathetic person, and I think that can start with how we eat as a family.”

American actress Mena Suvari stars in a new PETA ad to advocate the benefits of a healthy plant-powered pregnancy.

The 42-year-old, who is best known for her roles in iconic films like American Beauty and American Pie, is expecting a baby boy with husband Michael Hope.

Suvari went vegan in 2017 and is committed to raising her son with ‘empathy and kindness’.

For PETA’s poster, Suvari, who is going strong on her vegan pregnancy, poses with just a giant avocado obscuring her baby bump and a message that encourages more moms-to-be to “Go Vegan, Baby!”

‘Start with how we eat’

“With everything I know about the cruelty of the meat industry and the health benefits of going vegan, I knew I wanted to raise my son to be a kind, loving and empathetic person, and I think that can start with how we eat as a family,” Suvari told PETA.

According to the Academy of Nutrition and Dietetics, a vegan lifestyle can be followed in all stages of life including childhood, adolescence, adulthood as well as pregnancy.

Apart from Suvari, other celebrities who have touted the benefits of a healthy vegan pregnancy include Emily Deschanel, Daniella Monet, and Alicia Silverstone.

Silverstone, who is raising her son Bear on a vegan diet, in a recent interview with ET said that her son is ‘such an example of health’ and has never needed antibiotics or any other kind of medical intervention in his nine years of life.